The National Council of the Churches of Christ in the USA (NCC) celebrates the life and ministry of Rev. Cordy Tindell (C.T.) Vivian, who labored tirelessly to bring justice to our nation. As a civil rights leader and fearless advocate of nonviolence, he embraced the peace teachings of his faith tradition. He continued to advocate for racial justice and peace until his death.

“Rev. C.T. Vivian dedicated his life to justice and peace. He was tireless in his efforts and fierce in his pursuits, while upholding his faith and maintaining his belief in nonviolence. We are forever grateful for how his ministry has positively impacted our lives and nation,” said Rev. Dr. John Dorhauer, NCC Governing Board Chair and General Minister and President of the United Church of Christ.

Rev. Vivian’s earliest involvement in peaceful protests began with sit-ins at restaurants in Peoria, Illinois in the 1940s because they would not serve Black people. He later became an important leader in the Civil Rights Movement, serving as one of the lieutenants for Dr. Martin Luther King Jr. and organizing protests, developing strategies and otherwise pushing the movement forward. He was one of the first Freedom Riders and his actions challenging the sheriff in Selma, Alabama gained national attention, eventually leading to the marches across the Edmund Pettus Bridge. In this incident, Rev. Vivian was hit in the mouth by the sheriff for speaking out against voter discrimination. After being hit, Rev. Vivian stood up and continued calmly advocating for the right to vote. He was hit so hard that his mouth required 11 stitches before arresting officers took him to jail. The incident was captured on film and widely broadcast on national television bringing attention to the brutality of racial discrimination and injustice in the nation.

According to NCC President and General Secretary Jim Winkler, “Rev. Vivian exemplified the kind of courage we all hope to have when it matters the most. He set a high standard with his insistence on nonviolent direct action that is still relevant today.  His more than 60 years of ministry and advocating for justice has made our world a better place.”

A committed Christian and clergy leader, Rev. Vivian pastored numerous churches while continuing his justice work. He founded an organization in Alabama called VISION which helped low-income students prepare for college. This program would later become Upward Bound and expand into colleges and universities across the country. In addition, Rev. Vivian served as one of the leaders for the Southern Christian Leadership Conference for many years.

In 2005, Rev. Vivian contacted the National Council of Churches after Hurricane Katrina ravaged the Gulf Coast of the United States. He wanted to start a program called Churches Supporting Churches, where churches devastated by the hurricane in the region would receive help in rebuilding from churches outside of the region. His dedication and organizing abilities helped bring resources and build support for pastors and churches in Louisiana and Mississippi at a critical and vulnerable time for the region.

“I had an opportunity to work with Rev. Vivian when I was one of the staff assigned to NCC’s Special Commission on the Just Rebuilding of the Gulf Coast. It was a joy and a privilege to work with him. He was persistent, compassionate and kind. His dedication to the Churches Supporting Churches effort came through in every meeting and phone call I had with him and his laugh was contagious,” Rev. Dr. Leslie Copeland-Tune, NCC’s Chief Operating Officer, remembered fondly.

“As a graduate student intern, I vividly remember Rev. Vivian in 1991 when he led a race awareness workshop on the campus of North Carolina State University. A weekend under Rev. Vivian’s leadership set me on a path of discovery and I will always credit him with awakening me to the harsh realities of race, white privilege, and the systemic injustices embedded throughout American society,” said Dr. Wiens.

Because of Rev. Vivian’s steadfast commitment and love for God’s people, our nation is a more just place. We owe him a debt of gratitude. While we are saddened that he is no longer here to offer his wisdom and insights regarding the continued struggle for justice and equality in our nation, we rejoice in our shared belief that Rev. C.T. Vivian, a good and faithful servant, is received into the arms of our loving God.

At this time of loss, our prayers extend to his family and to the many people who loved him. May his memory be eternal. 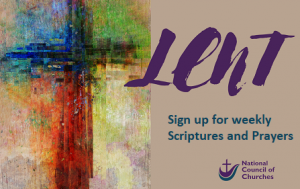